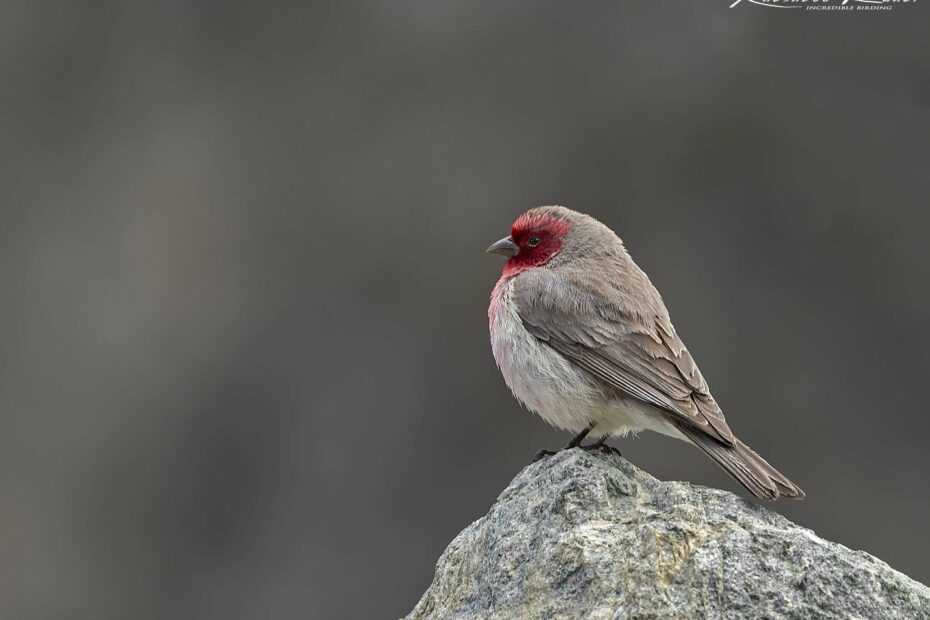 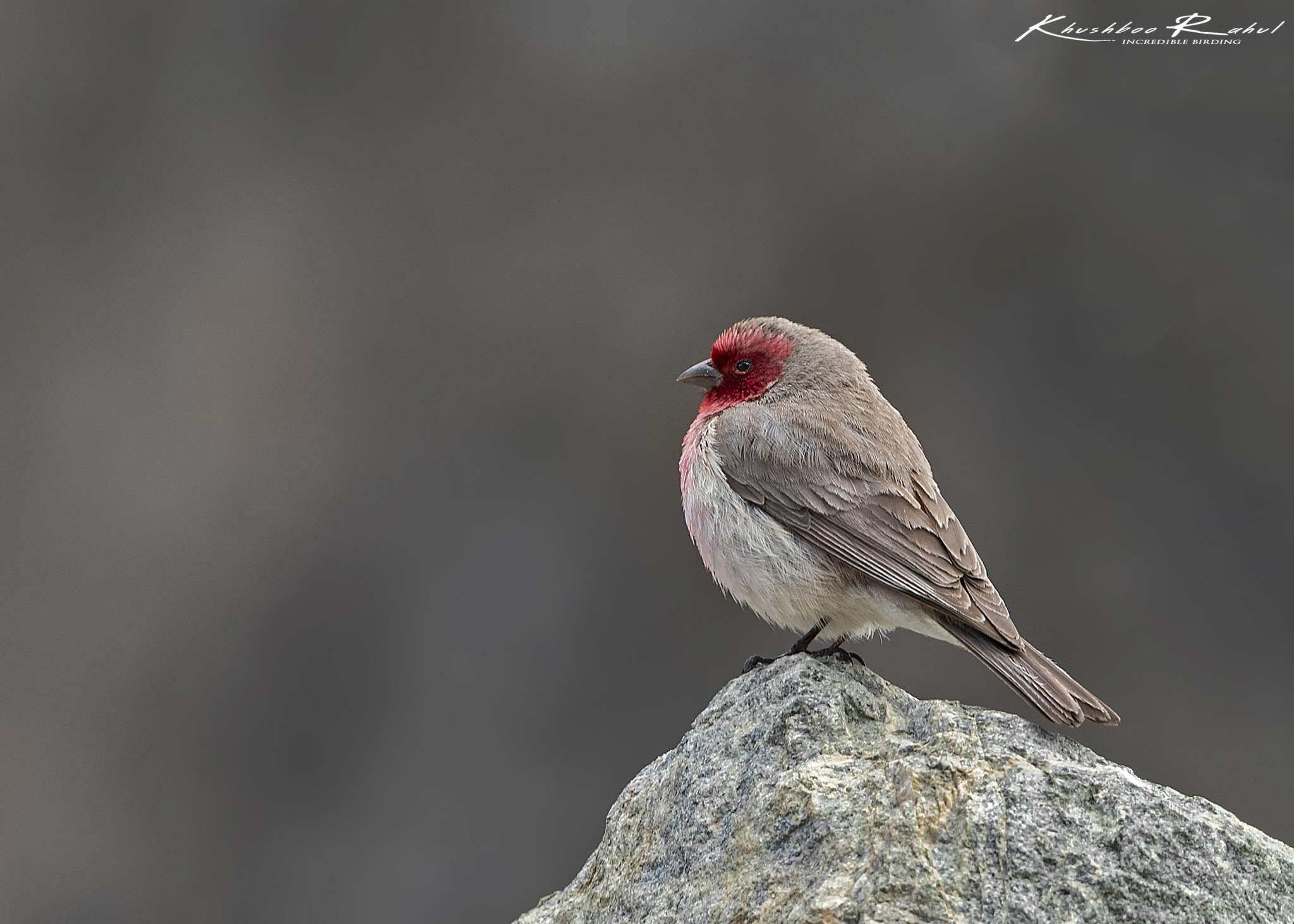 Discovering the avifauna of Ladakh

As a bird or wildlife photographer, the most exciting experience one can have is to discover a marvelous, unique species of birds that has rarely or never been spotted in a particular habitat. This is a story of how Rahul and I, Khushboo, unknowingly came across a spectacular bird species – the Pale Rosefinch (Carpodacus stoliczkae) and set the clearest photography record in the world for this bird. Let’s begin!

Back in 2018 while on a three-month long expedition way up in North India- in Ladakh, we were busy organising tours for different groups. It was by chance that we came upon a six day recess between the departure of our last group and the arrival of a new one. So, being the curious, ever-enthusiastic, and adventurous travelers that we are, we decided to head towards Nubra Valley. We initially planned to simply checkout the White-browed Tit-Warbler (Leptopoecile sophiae) in Nubra but then added Turtuk to our itinerary at the last minute. We spotted and photographed the Tit-Warbler in Hunder, Nubra Valley on 5th July 2018 and proceeded towards Turtuk in our jeep.

At around 0730 hrs (that’s 07:30 a.m) approximately 35 km from Turtuk, we slowed down the jeep near a barren valley through which the Shyok river flowed gracefully. Based on the terrain, the valley appeared to be a good habitat for cold desert birds. Indeed, as we turned around to take in the view, a flock of 20-25 small birds flew across the sky over our heads from left to right. Now, initially we assumed they were Common Rosefinches (Carpodacus erythrinus) but I was at a better angle and realized there was something different about them. Rahul took several photographs of many different, beautiful birds sitting on rocks as we continued to think what birds were those from the flock. A few juveniles, i.e. immature birds that were a part of the flock had red on their faces although it wasn’t prominent. The flock took off and flew quite low hovering over the ground and we couldn’t get any pictures of the juveniles. As they flew away, we heard their call, a ‘tieu’ that was softer than that of the Common Rosefinches. A few minutes later, multiple groups of bike riders came down the road. As the loud exhaust of the bikes was disturbing the birds and they weren’t staying still, we stopped looking for more birds after a couple of hours in Turtuk.

We knew that we had spotted something ‘new’ but there was no way to confirm it in Turtuk, thanks to the distorted network connectivity there. So as soon as we were back in Leh, I compared the photographs we took with those on the internet and found that the Sinai Rosefinch (C. synoicus) was the nearest match. So, to get a better understanding, we shared the photographs of both the male and female bird in many Facebook groups. As our fellow photography brethren observed the birds, most of them had similar opinions; that it was a Pale Rosefinch (C. stoliczkae), traditionally considered a subspecies of the Sinai Rosefinch. We were aware that a Pale Rosefinch and a Red-fronted Rosefinch both have quite similar facial color patterns. So, we reached out to Peter Clement who positively confirmed that we indeed had photographed a Pale Rosefinch in Turtuk, in the Baltistan region of Ladakh!

None of the rosefinches endemic to this region are as unmarked and pale as the bird we had photographed. Its face-forehead, chin, ear coverts, and upper throat were pinkish-red in color. They were distinctly separated from the grey-brown colored nape and crown. All this along with its whitish underparts, relatively long notched tail, and a small conical bill were indicators that it was a male Pale Rosefinch. Its wings and the tip of its tail showed significant wear which is a compatible sign of a bird in mid-summer although the bird retained its deep pinkish-red face. The female counterpart was un-streaked, had white dingy underparts, a plain brown face, and was drabber, unlike any other females of the rosefinch species.

Prior to this little impromptu meeting of ours with this species, it was considered conspecific with the Sinai Rosefinch that inhabit the Sinai region in Egypt. What differentiates the Pale Rosefinch from the Red-fronted Rosefinch is that the latter has a larger and paler bill base and is more heavily built than the Pale Rosefinch. The former doesn’t have any streaking on the wings, back, mantle, crown, or on the underparts. Hence, due to these peculiar attributes that differentiate it from other rosefinches, the Pale Rosefinch has now been redesignated as a full species. It comprises three subspecies – the C. s. salimalli – the only race previously reported from South Asia in central and north-central Afghanistan. The C. s. beicki occurs in Central China upto eastern Qinghai and the third one, C. s. stoliczkae, which occurs in Western China around South-Western Xinjiang.

The photographs that we clicked of the male Pale Rosefinch in Turtuk show that it has distinct grey upperparts and crown, a feature that is a diagnostic attribute of the C. s. salimalli. The two other races hailing from China are sandier on the wing coverts, crown, and upperparts. Peter Clement said that there isn’t enough material for a proper comparison as there are no authoritative pictures of these races on the internet. When Meinertzhagen (1938) compared the stoliczkae to the salimalli, he noted that, “… the male and female of this form [salimalli] are not clearly so sandy above, and the rose below in the male is more extended and deeper in tint.” Vaurie did not have any specimen of the stoliczkae with him to analyze but he did describe salimalli as having a rose tint that extended till the vent. In our photographs of the male bird, you can clearly see that it is greyer instead of sandy-brown and the rose tint doesn’t extend till its lower abdomen or vent.

As this species has rarely been photographed and wasn’t listed as a bird from India or the Indian subcontinent, our photographs and accounts have created a new record. If these birds are identified as C .s. stoliczkae, it would be a new race added to the list of birds in South Asia. So, our spontaneous decision to go explore the arid Baltistan region in Turtuk, Nubra Valley led us to a fascinating discovery! Maybe it’s because of experiences like these that Benjamin Desraeli once said, “Like all great travelers, I have seen more than I remember, and remember more than I have seen”. 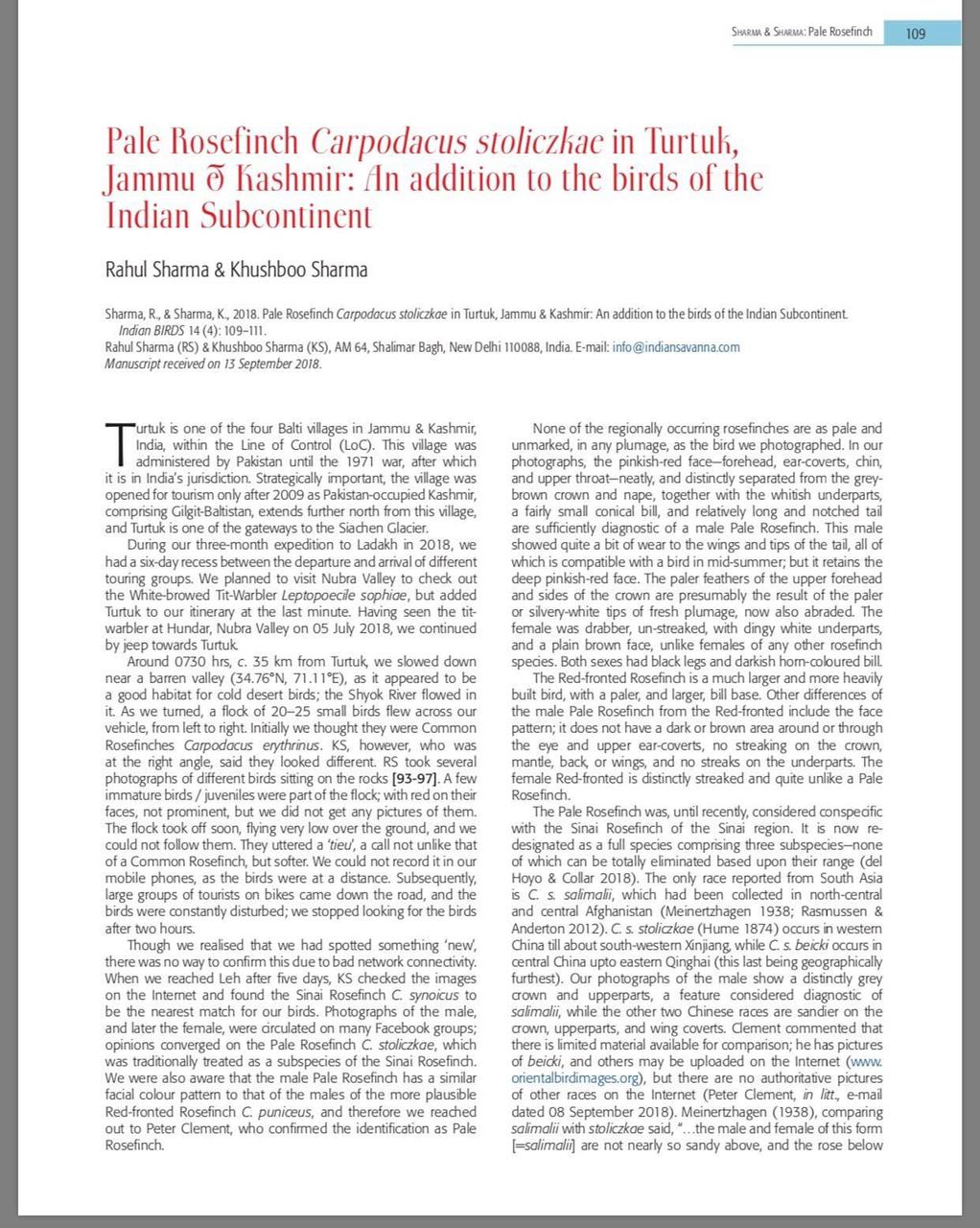 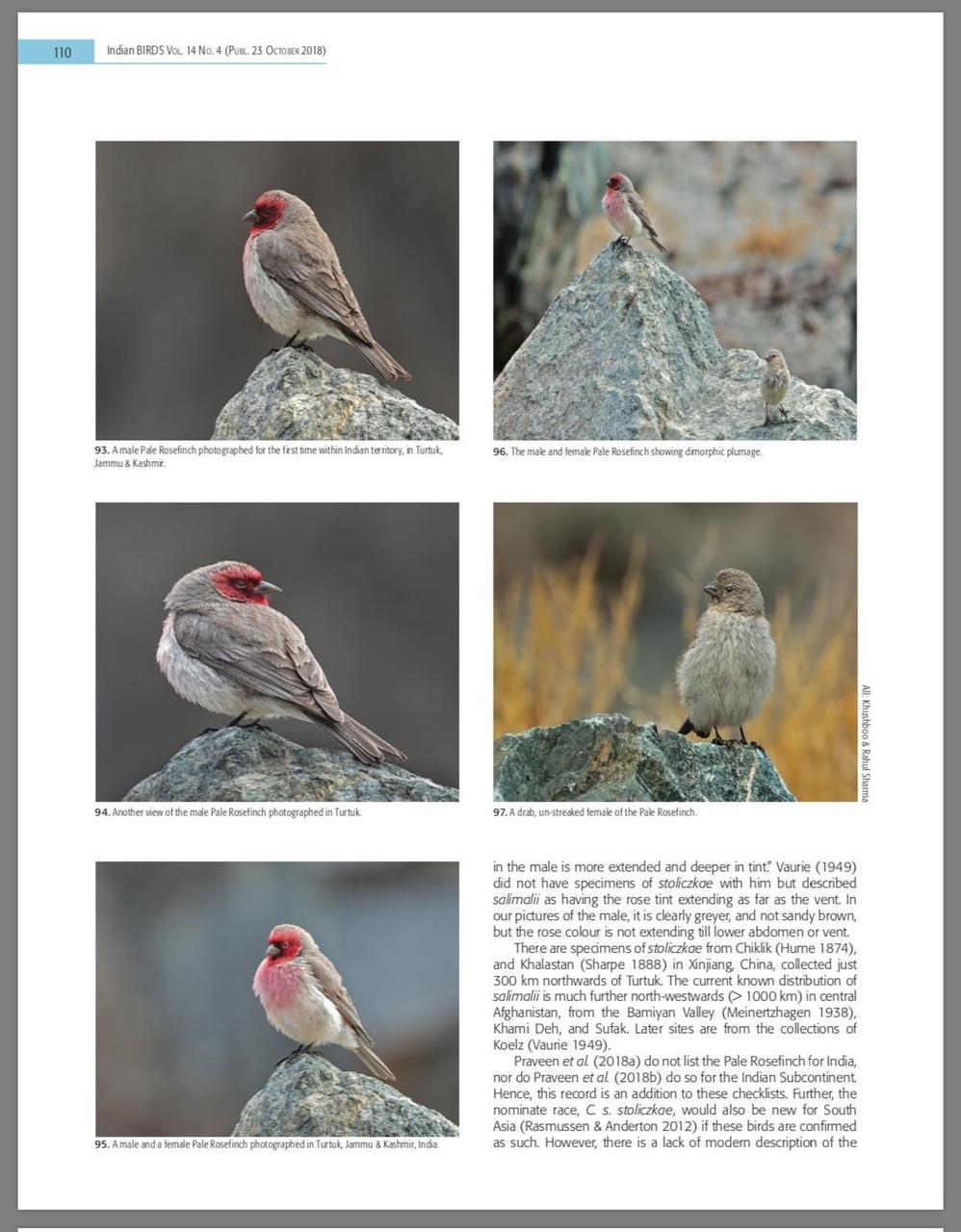 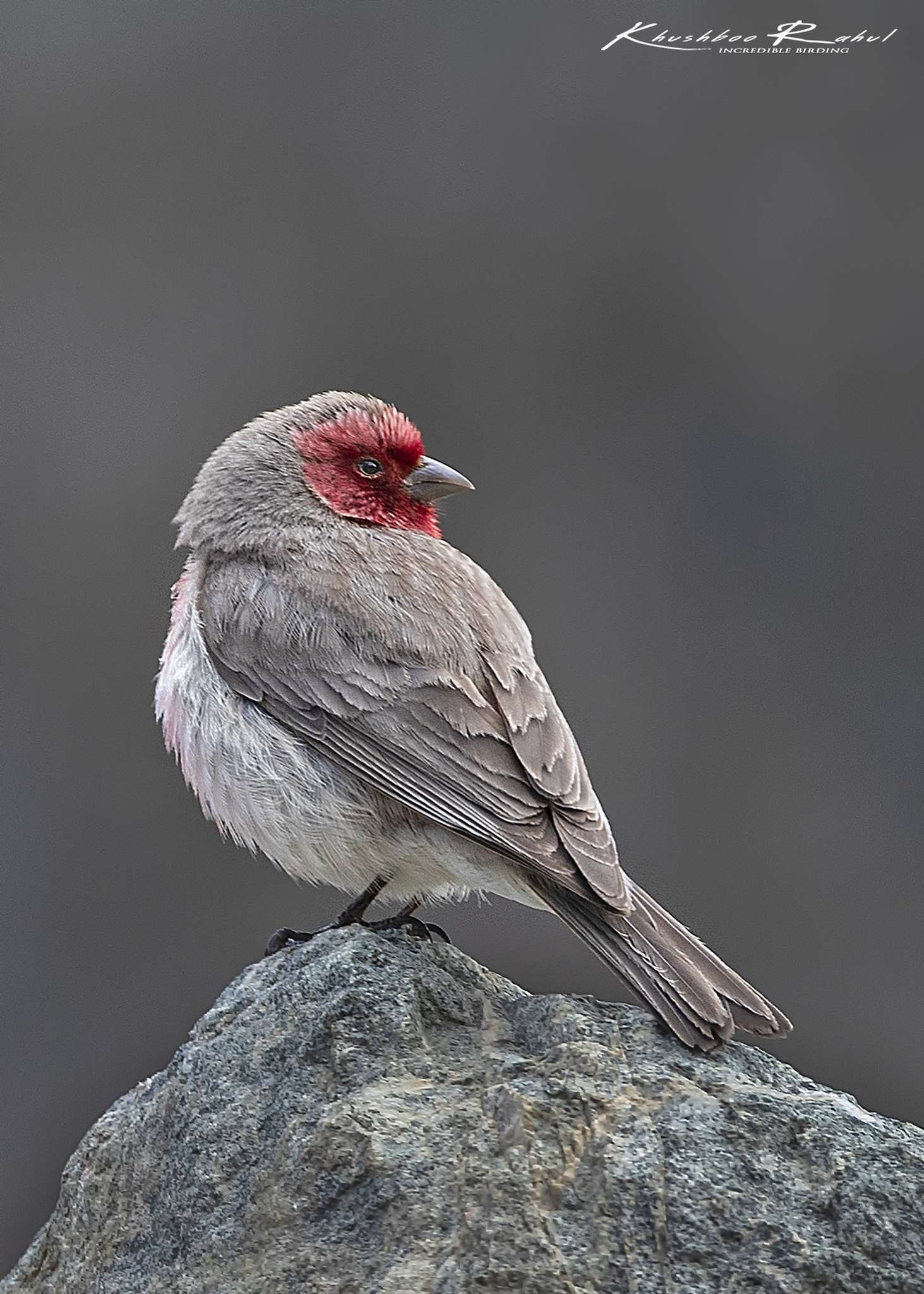 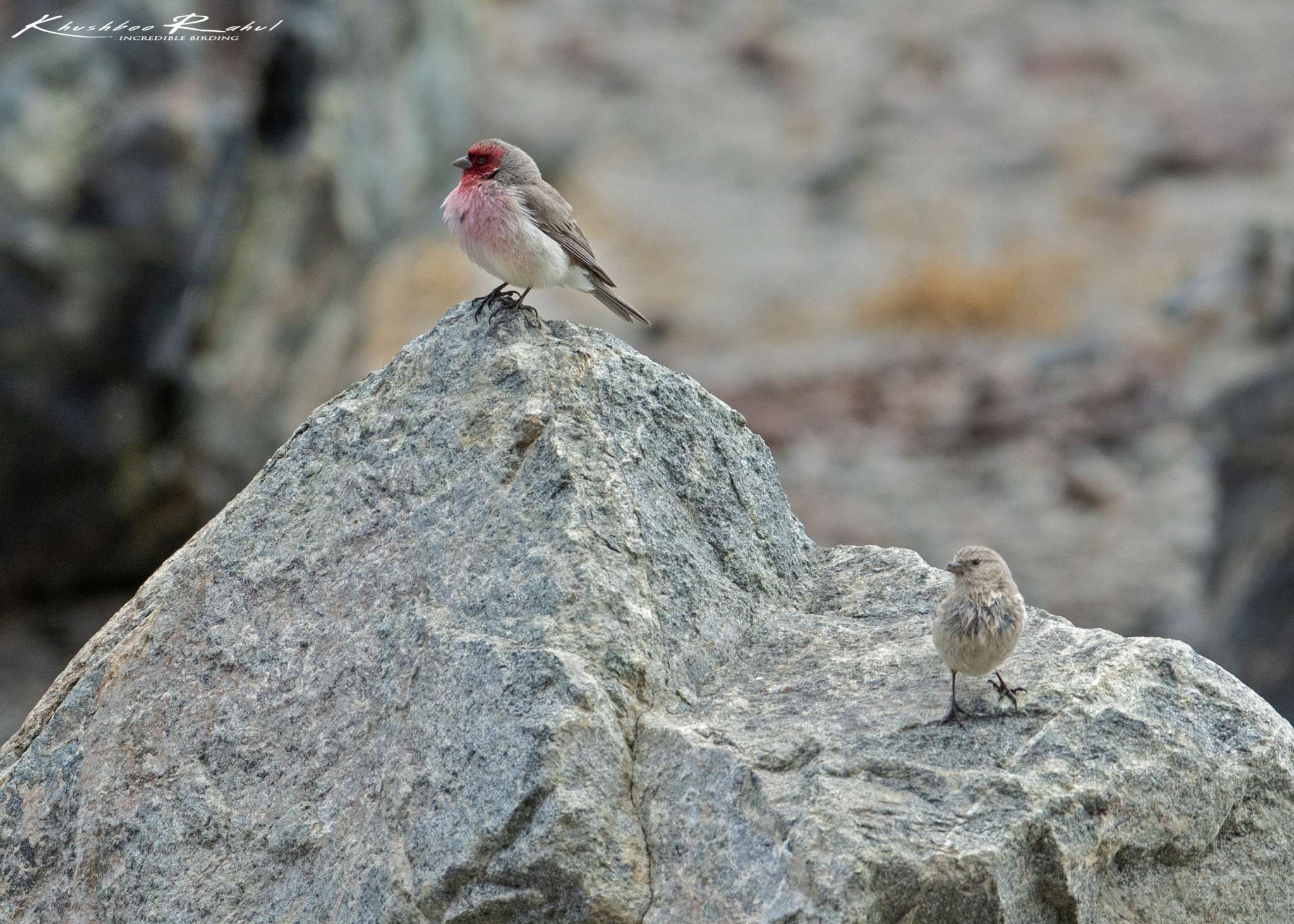 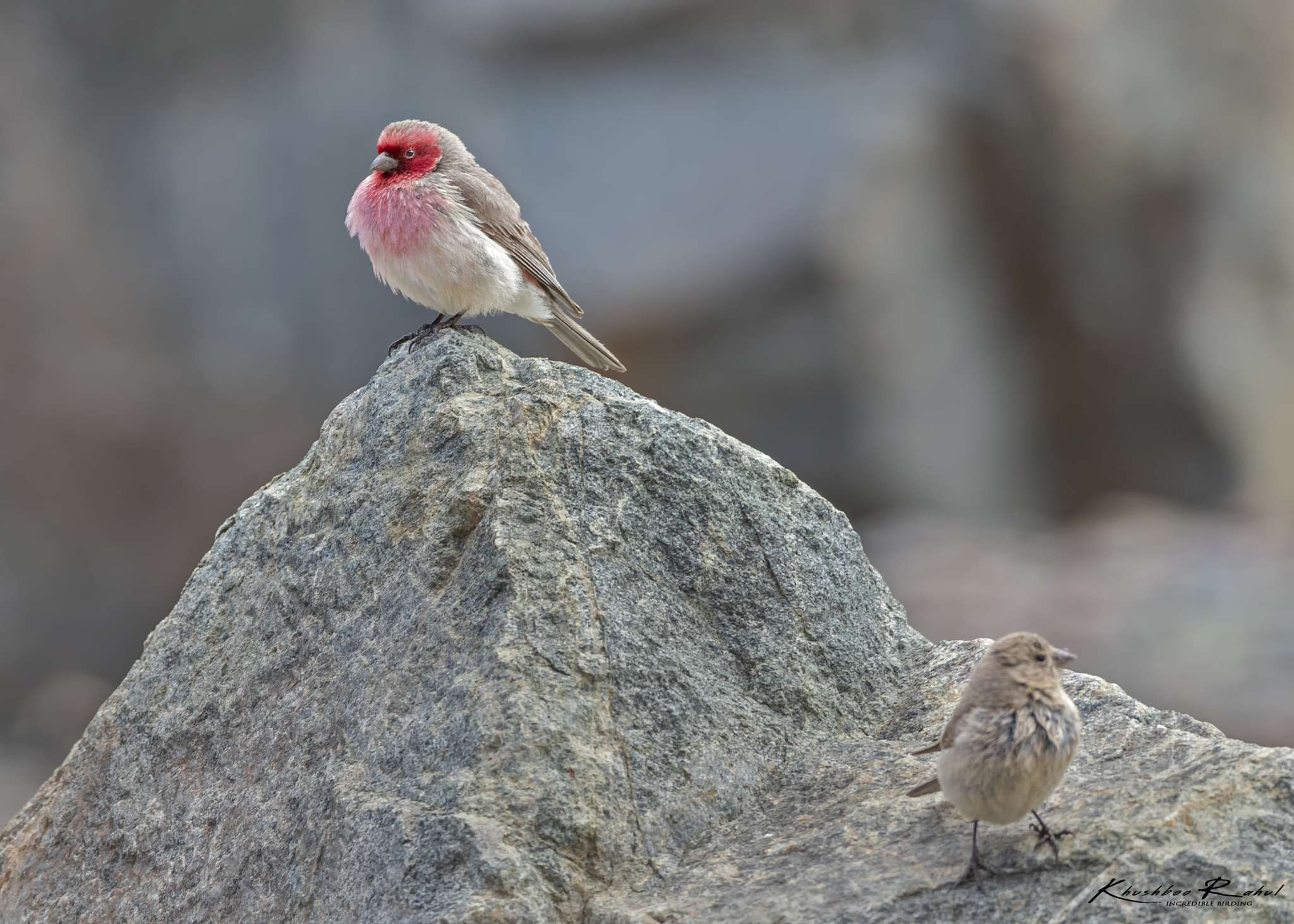